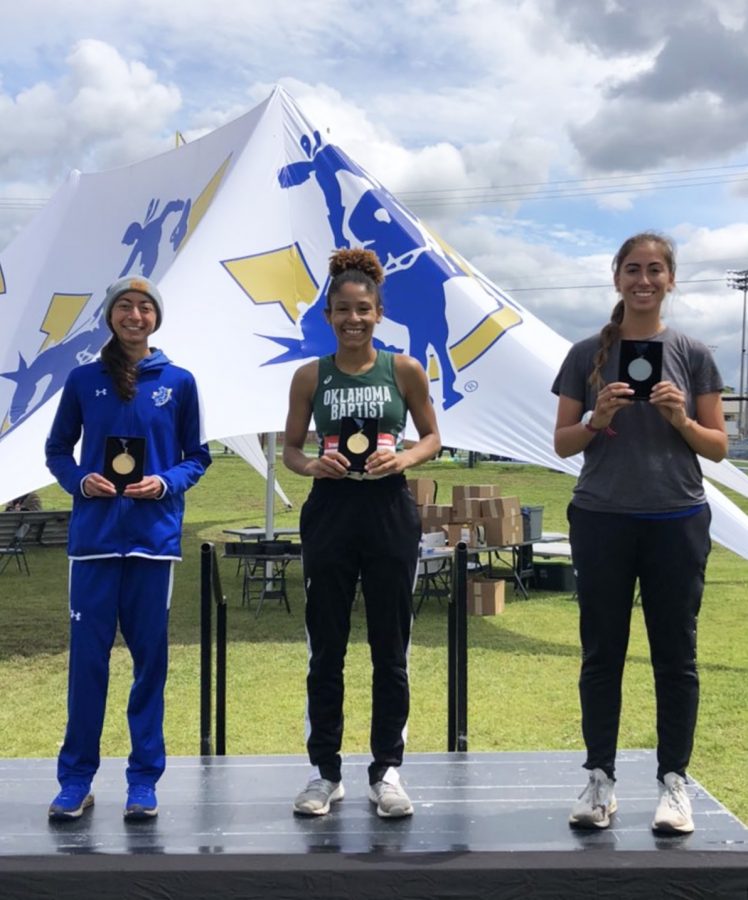 On Friday, April 16, student Rebekah Christman made history in track and field at Southeastern Oklahoma State University by breaking a school record and becoming the university’s first All-Great American Conference runner with a podium finish.

The Great American Conference is a conference that is made up of 12 schools throughout Arkansas and Oklahoma. For track and field, the top four finishers of a race are a part of the first conference team, and fifth through eighth are appointed to the second conference team.

Becoming an All-Great American Conference runner is a high honor and award and is also viewed as an opportunity to recognize that you ran as a top performer in the entire conference.

Christman was named to the first team for her event, the steeplechase.

The steeplechase is a race consisting of 7.5 laps around a track with obstacles such as hurdles and water pits. In total, there are 35 barriers and six water jumps that must be cleared in order to finish the race.

For Christman herself, the race is quite a challenge, but one worth tackling.

“For me, this race was something so completely different and exciting every time I ran it, I would finish and say to my coaches, ‘that was so much fun,’” she said. “The race itself is very challenging but I would say it is the most fun and exciting race I have ever run.”

She finished the race with a school record of 11 minutes and 37.23 seconds, beating her original best time by 24 seconds.

“It was the best feeling in the world,” Christman said.

Before the race even began, she intended to complete a podium finish, meaning she would finish in the top three. Christman trained six days a week, and strictly committed two or three days a week to the steeples. “On an average, I was running about forty miles a week this season.” she stated.

Last spring, Christman graduated with her bachelor’s degree in elementary education. Spring 2020 was supposed to be her last season of track, but the season was cancelled due to COVID- 19. Instead of pursuing a job on campus like she had originally planned, she chose to take the year to compete in her last season and pursue her master’s degree in educational leadership to become a principal.

The race was Christman’s last, and she wanted to use it as a chance to give her coach the best possible goodbye-run. “I wanted to give my last race my best shot at giving him a podium finish at a conference meet, something that in the history of our GAC conference had never been accomplished.” she stated.

Cross Country Head Coach Ron Hair expressed how Christman has always been a leader both in the classroom and on the track.

“Her positive attitude, strong work ethic, and her ability to balance academics and athletics makes her a great role model for other team members,” he said. “Any time you have the opportunity to coach a student athlete like Rebekah, the sense of pride and the memories you have of those experiences stay with you forever.”

The race was a memorable one for not just Christman, but also for her team, coach and all of Southeastern athletics. It is an example of how hard they work to be the best they can be no matter what sport or athletic activity they participate in, be it on a field, court or track.

“That race will be something I will always remember.” Christman declared.