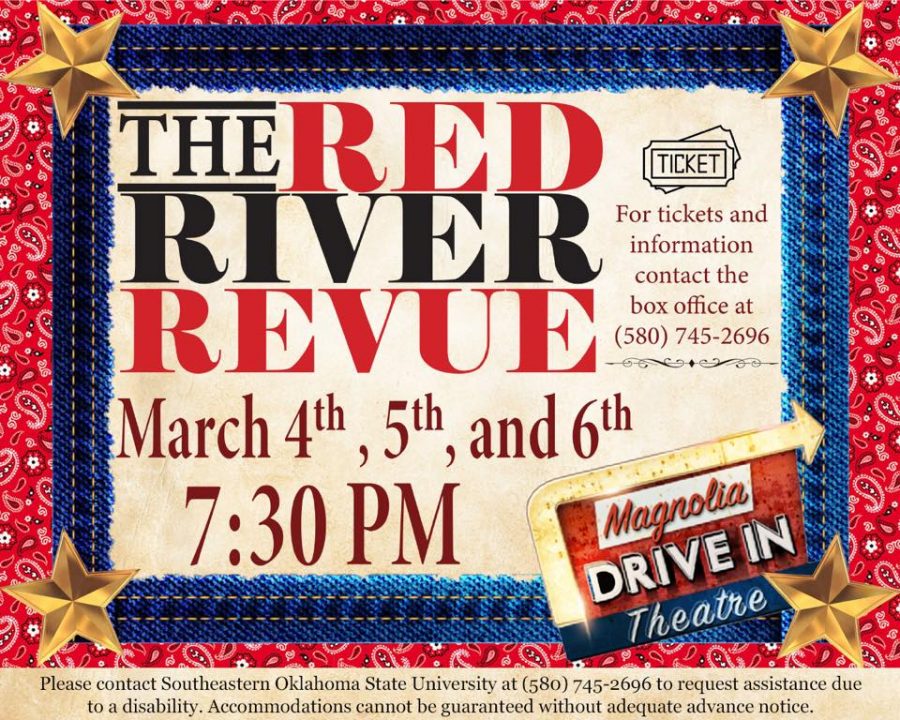 Southeastern Oklahoma State University’s “Red River Revue” will return to the stage on Thursday, March 4. “The Revue began in the spring of 2013. It was Dell McLain’s vision to do a “Branson” style show in Durant,” said Chorvettes director Deborah Clements.

The Revue is a collaboration between the Theatre department and the Chorvettes show choir group. A total of three performances will be held between March 4 and March 6.

The Revue will be held at the Magnolia Drive-In Theatre, located in the parking lot behind the Mike Metheny baseball field. The cost of attending the show is $20 per car and tickets can be purchased now until Friday by calling the box office at (580) 745-2696 between 1 p.m. and 4 p.m. Clements added that there will be no ticket sales on Saturday.

There will be one performance per day, beginning at 7:30 p.m. Those wishing to attend the performance are advised to arrive early and are required to practice social distancing by remaining in vehicles. Directions to the Magnolia Drive-In Theatre will be printed on show tickets.

Drivers should be aware that parking will be organized according to vehicle height, with smaller cars in parked in front of larger pickups and SUVs. Audience members who need special accommodations may contact the box office between 1 p.m. and 4 p.m. to make arrangements best-suited for them.

“We are very excited to be able to perform live this weekend. Our hearts and souls have missed entertaining and we are thrilled to bring our campus and town our socially distanced Red River Revue,” Clements said. “We are honored to keep carrying on Dell McLain’s vision.”