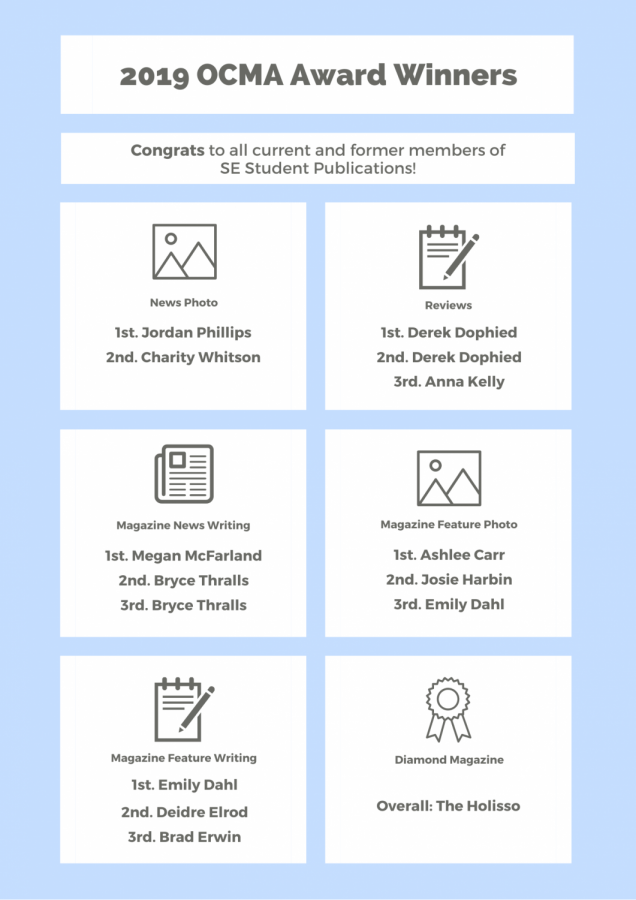 SE Student Publications is an organization designed to provide opportunities for students to gain the training and experience needed to advance in the professional world of media. This educational tool proves to be beneficial as ten students win awards in the 2019 Oklahoma College Media Association’s annual competition. These students also produced the best overall magazine, a feat not many achieve.

The OCMA, an organization created to benefit Oklahoma’s colleges and universities, conducts an annual awards competition and spring conference on Oklahoma State University’s campus. Students submit writings, photos and portfolios for ranking among their statewide divisions. Before the awards ceremony, students and advisors attend breakout sessions and a keynote address hosted by highly renowned media professionals.

This year’s meeting, however, was cancelled due to the ongoing pandemic. Fortunately, winners for the awards were still chosen, and members of SE Student Publications received numerous top ratings. Out of the 27 entries sent, 15 placed amongst the Diamond Division, including The Holisso as best overall magazine.

Winners are listed below:

The Southeastern has been a proud member of the Oklahoma College Media Association for over a decade. This organization was originally founded by Harry Heath, the director of OSU’s journalism school, in 1975. Their mission is to, “promote and improve student media at Oklahoma’s colleges and universities.” This recognizes that students are not only involved in newspapers and yearbooks, but also broadcast stations, websites and magazines.

Congratulations to all current and former members of SE Student Publications. We are proud to have such talent and dedication.