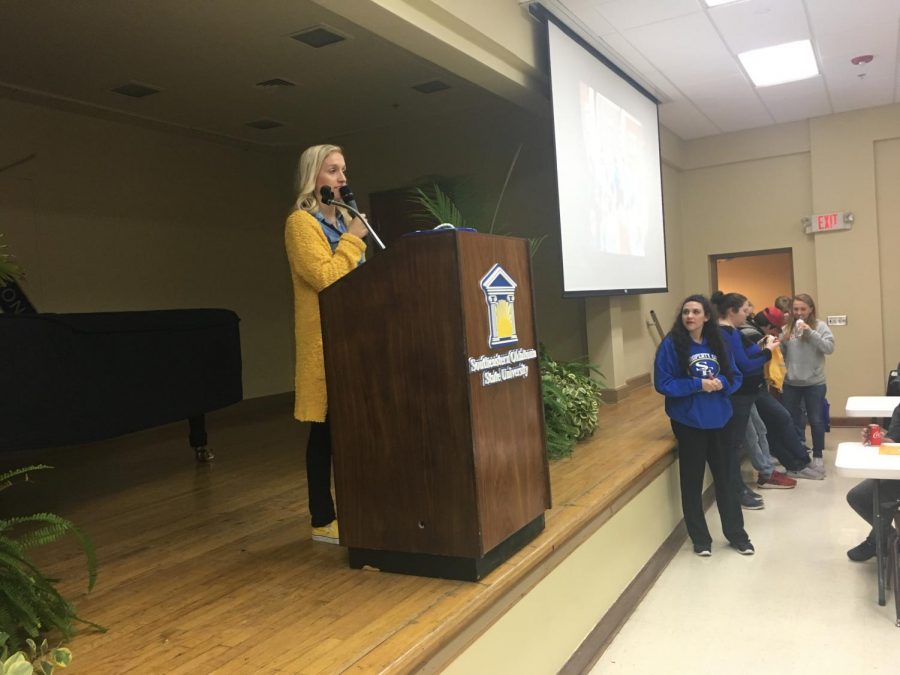 Sarah Hughes of SE recruitment gave out scholarships to incoming SE freshmen as Sarah Lehmann, a Sparks Dance member watched at the right of the stage.

SE Live was held at Southeastern Oklahoma State University on Wednesday Oct. 24 as the largest recruitment event of the fall semester. Students from across Texas and Oklahoma visited the university and met with campus faculty and staff while also having the opportunity to learn more about which major they would like to pursue.

The event began at 9 a.m. with a tour of the campus and concluded at 1 p.m. with lunch and an award ceremony in the Magnolia Ballroom. During lunch students visited with various organization booths such as the honors program, the SE media team, the broadcasting department, NASA and many others.

Sarah Hughes, SE’s high school recruiter and admission’s counselor, offered scholarships to aspiring future SE students during the award ceremony. SE’s 2018 fall semester boasted 4,483 students, the highest that its enrollment has  been in over 40 years and the SE recruitment team hopes to expand on that number next fall according to Hughes.

including media trivia game and a slow-motion Instagram video op.

Senior Desiree from Hugo High School is unsure about whether or not she will attend college but expressed an interest in writing and journalism and was excited for the opportunity to speak to journalism instructor Tascha Bond.

Senior and musical theater major Sarah Lehmann is a member of the Sparks dance team, which was one of many organizations attempting to recruit new members. Sarah and the Sparks team conducted a dance workshop that could be used for future audition to the SE Sparks.

“I’m excited to be here,” said Lehmann. “We’ve had over 10 interested candidates sign up to join the Sparks today. It’s a wonderful and fun event.”

Campus organizations typically set up booths on the campus front lawn, but had to move indoors to the Magnolia Ballroom due to weather conditions.