Self defense is self care 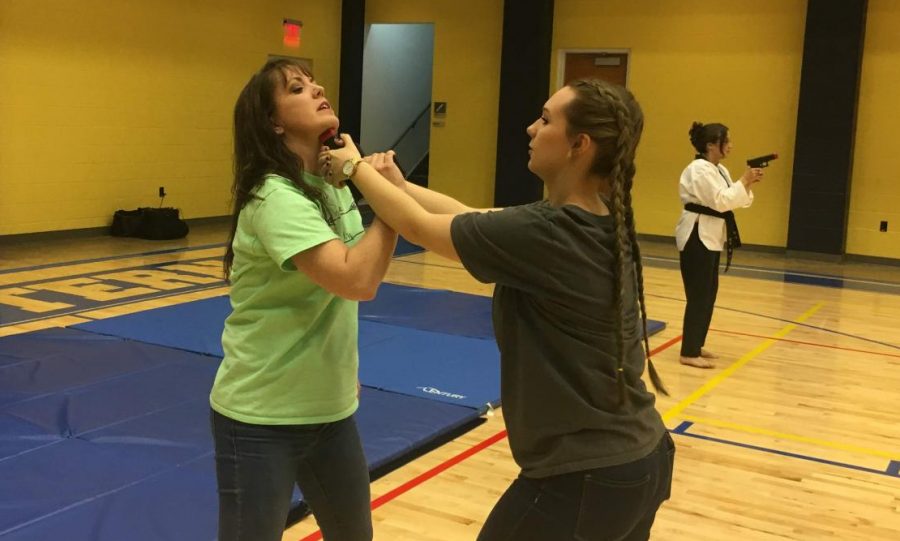 Participants watched demonstrations on self defense techniques, then were asked to practice with partners.

The year of 2018 has been considered the year of women’s empowerment. There have been marches, slogans, and an increase in positivity regarding social equality for women. Women are gaining confidence and participating in more self care. Most women today keep up with various beauty blogs, health and fitness pages, and magazines that include stress management and relaxation tips. However, how many women have researched self defense, or taken a class for it?

Southeastern Oklahoma State University hosted a self defense class on Oct. 23 which was led by McAlester Tae Kwon Do’s master instructor Ray Harpe and his colleague Betsy Dew. Melanie Jones, who also has a blackbelt, was there as an assistant and representative for the Choctaw Nation Homakbi Ribbon.

Fighting stance was the first part of self defense covered. This stance is the basis for every move afterwards and contributes heavily to a successful defense. A variety of blocks were taught, which are ways to keep an attacker from actually making harmful contact; this is one of the key components to staying safe.

Participants were also taught what areas to strike in order to help their getaway and ways to verbally discourage an attacker. In preparation  for a more serious attack, these women learned how to use an attacker’s knife against them, how to take away a gun being held to their head, and how to push off an assailant when on their backs or against a wall.

Surprisingly, only 14 women showed up for this free, community-wide class. A study for the Violence Policy Center revealed “1,686 women were murdered by men in the U.S. in 2015.” According to the Huffington Post, “Every 98 seconds someone in the U.S. is sexually assaulted. That means every single day more than 570 people experience sexual violence in this country.” Although they should not be, these numbers are staggering. Statistics like these are all the more reason for women to want to be able to defend themselves. Self defense classes are taught with a specific goal in mind: to keep people alive.

As ignorant as it may be, there is a stereotype that depicts women as weak and vulnerable. While this is not the truth whatsoever, the men who assault women believe just that. These aggressors view women as defenseless and if a woman has not taken a self defense class and does not carry a weapon, she essentially is.

This is why opportunities such as the class offered at SE are vital to women’s safety. A woman will not always have a coworker to walk her to her car or a friend to go with her to Wal-mart. Now is not the time for women to be damsels in distress. Now is the time for women to stand up for themselves, in their words and in their fighting stances.