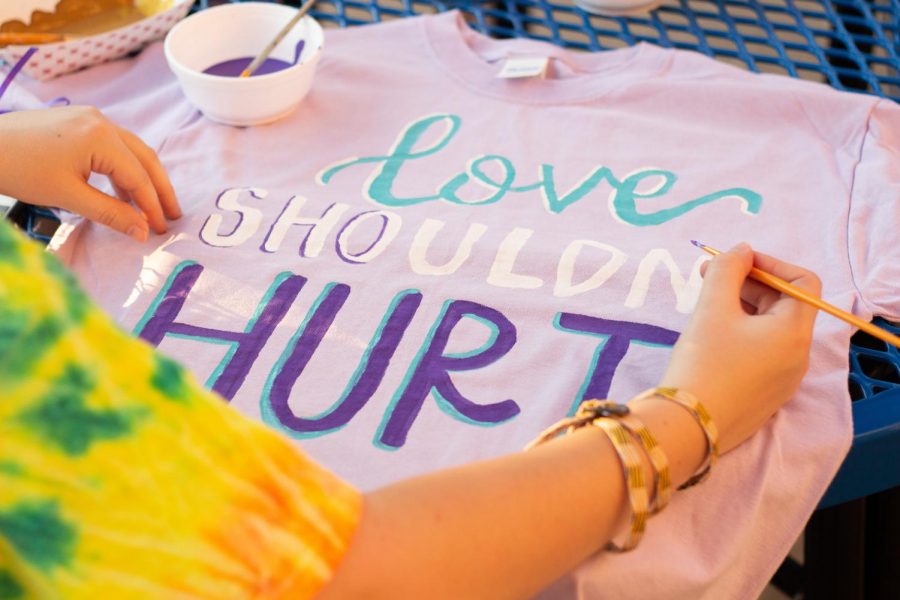 “It won’t happen again, I love you,” he said the first time. “I’ll get better, I promise,” he said the second, maybe third time. “This is your fault,” he said the hundredth time. Which time will the victim get help? How can they?

According to the National Coalition Against Domestic Violence, one in three women and one in four men have been, or will be victims of some form of physical violence from an intimate partner. Women between the ages of 18 and 24 are the most common victims of intimate partner violence. This statistic is one reason Southeastern Oklahoma State University hosted a domestic violence awareness event in the Student Union Plaza on September 25. This event, “Love. Sex. Lies.” asked students the question, “How healthy is your relationship?”

Pizza encouraged students who might not have heard of the event to check out the action. Purple t-shirts were available to be painted with slogans such as, “Stop Domestic Violence,” “Take Back the Night” and “Love Shouldn’t Hurt.” These t-shirts were then gathered to be hung up on Monday, October 1, the beginning of Domestic Violence Awareness Month, and also Durant’s annual “Take Back the Night” march and candlelight vigil.

Stephanie Speers, an advocate for the Crisis Control Center, handed out pamphlets and informed students of resources and services available for domestic violence victims. A few of these include: advocates testifying in court, safe places to stay, help with police interviews, safety and family meetings, job referrals, and budgeting advice. These are just “everyday things to get them back on their feet,” said Speers.

Speers and the Crisis Control Center want people on campus to know that they matter to them, and they will be their support system. “Having an open line of communication will help victims heal and recover,” said Speers.

Southeastern Police Officer, Tasha Yarbrough attended Love.Sex.Lies. and painted her own T-shirt in an effort to raise awareness. Yarbrough said the reason she got into law enforcement was to help survivors. She thinks it helps to have experienced domestic violence first hand because all the training in the world cannot teach someone how it feels to be in a victims shoes. “People don’t have to hide or be silent,” said Yarbrough. The Southeastern Police Department wants students to know that there is someone nearby that is there for them. Any help that a victim needs is just a report away.

If you or someone you know is experiencing domestic violence, please report to a local police station or call the Crisis Control Center at 580-924-3030.