Savage Storm football ends the season with a victory over ECU 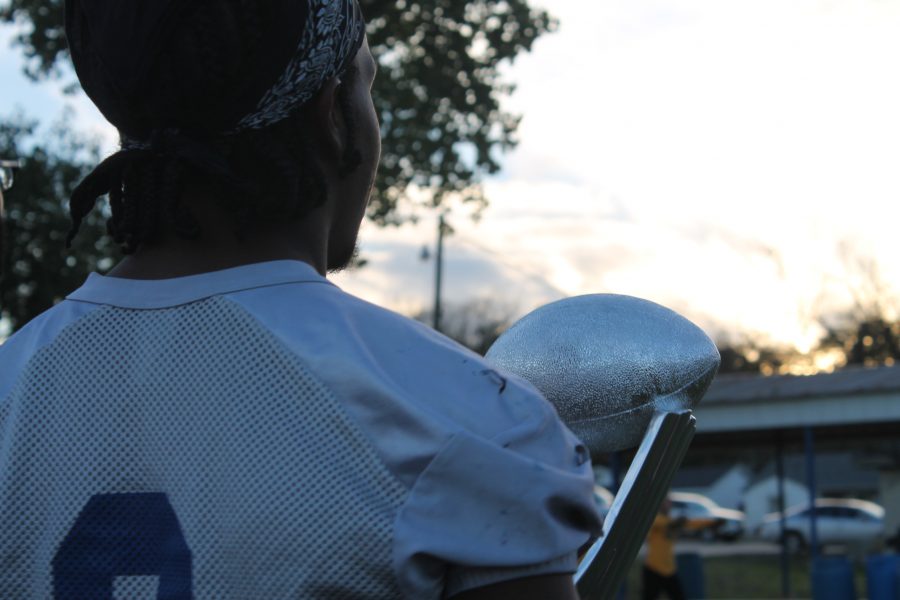 Southeastern football player holds the rivalry trophy at the pep rally, Thursday, Nov. 10. The Savage Storm will keep the trophy another year.

ECU won the coin toss and received the ball first. The Southeastern defense responded and the possession ended in a punt. Southeastern took over from their own five-yard line.

Ronnie Green started off the drive strong running for 21 yards on four carries. The Southeastern unit continued to make small gains down the field until Devlon Wortham ran for an 18-yard touchdown putting Southeastern up 7-0.

ECU responded the next possession. Their drive took up the rest of the first quarter and they finished the drive off on the first play of the second with a 29-yard touchdown pass.

The ECU defense was up to the challenge next possession. Bryce Steele made a fantastic leaping catch for 32 yards, but it only resulted in a field goal after great play from the ECU defense.

The ECU offense started strong during the next possession and moved the ball into the red zone almost immediately. It was all for nothing however, as Jarrett Ingram made a beautiful one-handed interception for the Southeastern defense.

Southeastern mimicked the same style of play they displayed on the first possession and made small gains down the whole field. Five minutes later, Ronnie Green scored on a seven yard rushing touchdown.

The ECU defense responded and forced the Southeastern offense off the field after three plays. The ECU offense took over with 30 seconds at their own 34-yard line.

ECU ,with limited amount of time, made a jaw-dropping play. The ECU quarter-back Brook Holder completed a 13 yard pass to David Moore pitched the ball to his teammate Dezmon Jackson for an additional 30 yards, otherwise known as the hook and ladder play. This resulted in a ECU field goal and the end of the first half. The score at half was 17-10 Southeastern.

Southeastern received the ball to start the second half. They made small gains down the field plus a 36 yard catch to Anteric Maxey. The ECU defense held strong on their side of the field and the Savage Storm had to settle for a field goal again.

The ECU offense would respond quickly. Three plays into the drive, David Moore ran for a 58-yard touchdown. The PAT failed however making the score 20-16.

Devlon Wortham opened the next drive with a 24 yard run for the southeastern offense. The drive ended with a ten-yard touchdown pass from C.B. Cantwell to Kaymon Farmer. Southeastern went up 27-16.

ECU slowly marched down the field including a 20 yard pass from Holder to Tre Harvey. Their drive finished the third quarter. Holder finished the drive with a two-yard touchdown run. Mason converted on the two-point conversion making the score 27-24.

The grim situation would not last long however, as the defense forced David Moore to fumble and the fumble was recovered by Jarrett Ingram.

The Southeastern offense redeemed itself next possession. They took 5 minutes off the clock and the possession ended with a 15-yard touchdown run by Ronnie Green. The score went to 34-27.

With a combination of great defense and clock management, SE held on to win 34-27 and capped off their season winning against their biggest rivals.