In spring 2010, senior Matthew Heggy, a business management major, was elected to serve Southeastern as the Student Government Association president.

Heggy said not long after his election, while he was searching for internships and not having the best luck, his advisor Dr. Andrew Tiger presented him with an exciting opportunity. With Tiger’s aid, Heggy met with the CEO of the Federal Census Bureau Ted Johnson for an interview. Heggy soon found himself working for the Federal Census Bureau in Washington, D.C. this past summer.

Although Tiger is no longer with Southeastern, Heggy said “He was a great professor and great adviser.” With Tiger’s help, Heggy said he was able to experience firsthand employment with the federal government.

His internship took place at the U.S. Census Bureau’s Human Resources Department. Some of his responsibilities included conducting a lot of research and hiring.

Heggy said he had the privilege of meeting Sen. Dan Boren. He also took advantage of his surroundings and was able to visit many U.S. landmarks, monuments and toured the Capitol Building.

When his internship came to an end, Heggy said it was time to turn his attention to his SGA presidential duties.

Heggy is a member of several SE organizations that have given him the leadership qualities needed to be a successful student body president including the Honor’s Program, Blue Key and the Oklahoma Student Government Association’s Supreme Court.

He is also the Chair of the Council of Student Body Presidents, where he attends meetings with other SGA presidents from across Oklahoma.

“It’s interesting,” responded Heggy when asked about his experience so far as president. “It’s not something to be taken lightly. It’s a lot of work.”

According to Heggy, the role of SGA president requires a lot of time, effort and dedication. Though it’s a lot of hard work, he enjoys his new position.

“I enjoy being able to represent well,” he said. “I like feeling a sense of accomplishment and it’s fun.”

Taking his new title of SGA president on with much enthusiasm, Heggy has plenty of refreshing plans in store for SE. With his leadership, SGA has a successful Homecoming and Spring Fest in store.

Heggy also plans to have a full senate in the spring. “We currently have nine seats open,” he said. “We need student leaders.”

The SGA is planning for the future by bringing people in and then bringing them up. “We’ll give them leadership training,” said Heggy.

The SGA plans to play their part in “going green” by decreasing the use of paper on campus. “We are significantly trying to reduce paper,” said Heggy. For example, the SGA members try their best to bring their laptops to their weekly meetings so less paper is used.

A big concern at the moment is smoking on campus. “SE is fairly divided on this issue,” said Heggy. “Individual rights as well as health concerns are our main priorities.”

Heggy plans to have a lot more communication between the students and SGA. “We want the students to understand how SE works,” he said.

As president, Heggy is planning to keep the Student Senate thriving and to improve SGA overall.

“We’re keeping the knowledge and process we have alive,” he said. The SGA’s motto is: “Serving the students,” and that’s just what Heggy is implementing.

“Remember that we’re here,” he said. “We need your opinion and support if we’re going to be effective and give students what they need.”

If you have a concern or suggestion for SGA, feel free to contact Matt Heggy at 580-745-2192 or email him at [email protected] 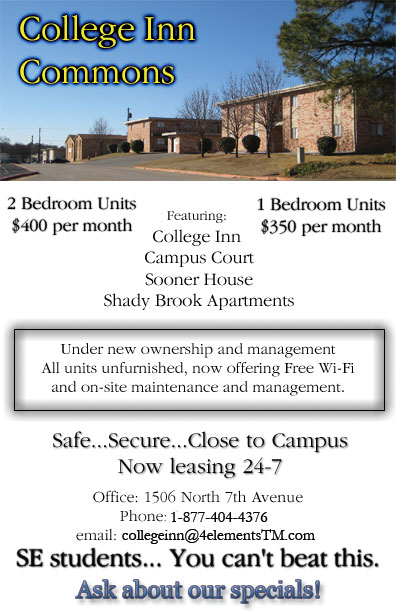