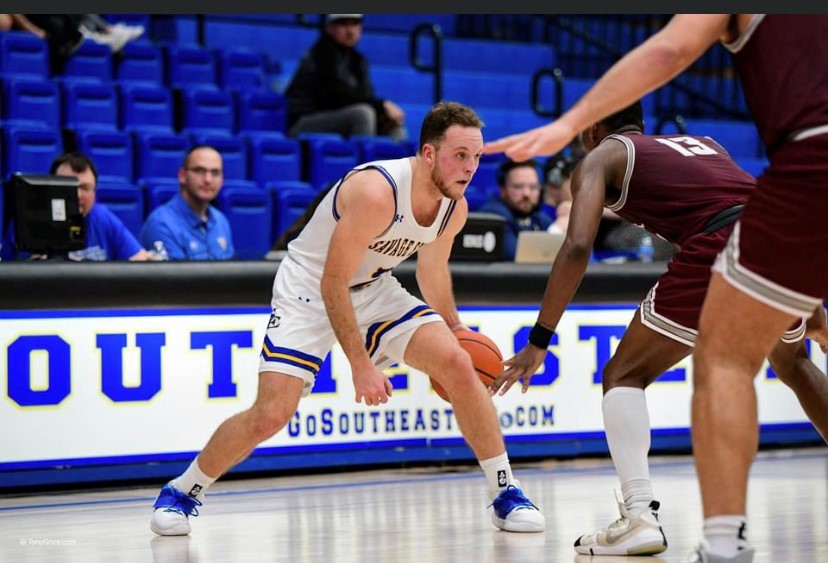 Dworsky is a point guard for the men’s basketball team who is pursuing a master’s degree in Sports Administration. He is involved in two campus organizations that promote the growth of leadership skills and unbreakable bonds: the Student Athlete Advisory Committee (SAAC) and the Fellowship of Christian Athletes (FCA). Dworsky is the vice president of SAAC, which hosts events on campus encourage the student athletes to be involved in the community. “We put on different events on campus in our community to make sure our student athlete’s voices are heard and make sure we are getting involved and engaged,” he said. He is also a huddle leader for the FCA college ministry group. Every Wednesday night, the group meets on campus to enjoy a game, free food and a message from a guest speaker.

Dworsky began playing basketball at five years old. Throughout his childhood, he played on a community YMCA league. During the summers, he would play on a basketball team based out of Louisville, TX, called the Texas Triumph. He gives credit to the team for helping him develop his basketball skills.  “It was really cool to just work on my game and really see myself grow over the summers,” he said. “So, I think the Texas Triumph is a big reason why I am here at Southeastern.”

Dworsky just completed his fifth year playing for the Savage Storm Men’s Basketball Team, and this year was special for him. “It was really cool for me that I won an award, but it was equally as cool to see all my teammates win awards, too,” he said. “Our team this year won the regular season conference championship. That was kind of a cool way to go out for my senior year.”

He noted some of the challenges he faced throughout his college career. “Everyone talks about how different (college) is, and you don’t really appreciate that until you get to college and you get to experience it yourself,” he said. “The pace is so much different – it’s such a faster game when you’re in college.” Along with adjusting to the new pace and physicality of the game, COVID-19 brought his junior season to a short end. The team was on their way to the first round of the national tournament when they received the call. “We were on the bus on the way to the first-round game and we got the call from the athletic director. He said, ‘you guys need to turn around,’ and everything kind of got out of control. So COVID-19 put an end to junior season. Fortunately, the next year, my senior season, we actually got to play a season, but COVID-19’s impact was definitely felt.”

Next year, the teams played with strict safety precautions. “It wasn’t the end of the world,” Dworsky said. “It was just different for everybody. I’m grateful that we got to play a full season.”

When he reflects on his basketball career, one recent memory stands out above the rest. His most memorable experience happened just a few weeks ago, when the Savage Storm Men’s Basketball Team won the conference championship in the Bloomer Sullivan Arena. “That’s why you play, you know? You play to win games, you play to be the best in conference,” he said. “That was our goal coming into the season, and it’s been our goal every year since I’ve been here.” Dworsky remembers the exhilarated feeling he and his teammates shared as they each climbed a ladder to cut a piece of the net as the home crowd cheered. “We’ve been close so many times, but we weren’t able to get over the hump,” he remarked. “So, this year, to be able to do that was, to me, the most memorable.”

He is grateful for the team’s supportive community and fan-base. “It’s nice to win games, that’s why you play, ultimately, but what makes it rewarding is the people that come to cheer you on and support you, and I think that’s what is the most rewarding for me.”

Right now, Dworsky’s focus is on finishing his master’s degree. As for life after college, he is unsure what the future holds  However, he is very sure it will include basketball. He is open to pursuing a professional career in basketball in another country. Currently, some of his former friends play for teams in Spain and Australia. Eventually, he sees himself becoming a basketball coach.

He has learned many valuable lessons throughout his basketball career, both on and off the court. He encourages others who are thinking about starting sports to take the leap of faith. “Sports has given so much to me,” he said. “I feel like, not only from a sports aspect. It’s just taught me so many life lessons. A lot of my best friends that I am going to have for the rest of my life are because of sports, especially here at Southeastern.” He stressed the importance of being involved in a sport and how much a person can grow from it. “You get so many valuable experiences, not only from playing games, but being part of a team, learning teamwork, and how to be a leader. Not only that, but it gives you an easy way to meet people and make bonds for the rest of your life.”

Wherever Dworsky’s  future takes him, he wants his teammates and supporters to know just how grateful he is to have been part of the Southeastern community. “Just looking back on it now, my career literally just ended, so I am still trying to process it all. But I’ve been super grateful for the whole opportunity, not only playing basketball at Southeastern, but just going to school here, just meeting so many great people,” he said. “It’s crazy, I never would have imagined myself in Durant, Oklahoma, growing up in Dallas, Texas, a big city. My high school had more students than Southeastern. So, you go from that, to ‘okay, I’m going to a town I’ve never heard of in Oklahoma, I don’t know anybody there.’ It’s just been such a blessing and it’s worked out so perfectly. I’ve made so many friends, I’m having such a great time, and I’ve enjoyed every second of my time at Southeastern.”